Agape House was witness to God’s work in a mighty way this past month. In fact, Agape House was only a go-between, it was all God. Scripture tells us in 1Thessalonians 5:17 to “Pray without ceasing”, so that is what the team at Agape House did. They prayed.

A young single mother who had recently mustered up enough courage and self-confidence to move to a shelter and leave an unhealthy situation was in desperate need of an automobile. The Mom’s van, in its current condition, was very dangerous for her to drive and the repairs were non-stop and expensive. After Agape House was able to visit with this young Mom, it became evident that repairing the van wasn’t an option. The van was worn out and was going to be incredibly expensive to fix.

We prayed for God to show up and deliver a car for this young mother.

God was faithful, and prayers were answered.

Even though the mother is in Prescott, the miracle originated in the east valley. In Apache Junction there is a couple who has dedicated their business to helping single mothers with their automobile needs. Their business is Becky’s Charity Car Sales. The owners, Kevin and Becky, use their non-profit organization to help bless mothers with their transportation needs.

About Kevin and Becky

This all started when we donated a van, in December 2018, to a woman who couldn’t get to her doctor appointments and lost her job because her vehicle broke down. She needed a “Miracle”! That is what Our 501c3 enables us to do year-round. All the money donated is tax deductible and goes to help low income individuals or families either repair their vehicle or acquire a vehicle. 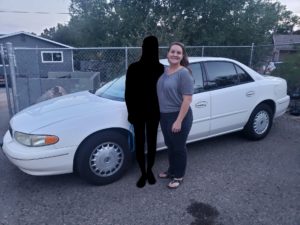 Agape House had been praying for a solution for this mother and was led to reach out to Becky and her husband.

After learning of the family’s need, Becky and Kevin reached out to the community to find a car.  And they found it!  Howard Hinkle, owner of B&H Auto repair in Apache Junction, had had acquired a car from a customer and generously chose to donate it after he heard of our need.

Kevin and Becky made the necessary repairs to the donated car. They gave the mother money for registration. Plus, they purchased the car seat she desperately needed and even gave her money for gas.

Despite Becky’s Charity being located in Apache Junction, this mother’s story touched them so much that they wanted to bring the car to her and present it themselves. But the story doesn’t end there, after a few weeks the car had some problems, immediately Kevin and Becky told the client to bring it to them and they would fix it. Their mechanic fixed many potential problems as well as the original one. Now the young family has a beautiful car that runs wonderfully. The mother is elated to have such a nice and dependable car.

The mother has kept in touch with Kevin and Becky. For the first time in years, she reported that she was able to visit her parents, all because she now has a car. It was the first time her parents had been able to meet their grandchildren.