On the homeless-perspective spectrum, there are those who, at one end, work with, donate to, or embrace homeless people. 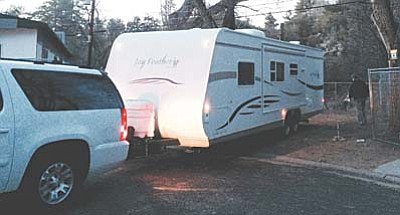 The other end includes people wanting the city to “work to clean Prescott of all the drug addicts, drug recovering, homeless, mentally ill bums,” as evidenced by online comments, emails and phone calls stemming from The Daily Courier’s series on the homeless.

Most area residents fall somewhere in the middle. This is a look at what has happened since our series began on Jan. 1.

One Prescott family, which wishes to remain anonymous, has donated a 30-foot recreational vehicle that can serve as transitional housing for a family. They delivered the RV to the Hitching Post Mobile Home Park on Jan. 25 to one of three vacant spaces offered by park owner Judy Clapp.

The family purchased the RV new in 2007 and used it for about a half dozen vacation trips. It is in immaculate condition, and comes with bed linens, bins with children’s games, folding chairs for outside, DVD player, pots, pans, dishes, coffee maker, toaster, and cleaning supplies.

The mother said the family has helped with food baskets for homeless shelters, and has become more and more aware of situations in which families live. In speaking with her church congregation and with Paul Mitchell, executive director of Coalition of Compassion and Justice (CCJ), the family decided to donate the RV. CCJ will maintain the unit and select the families who will reside there for six months to a year while they work toward more permanent housing. This also frees up space in the shelters, he added.

“We are not doing this for anything but what God has taught us to do,” the mother said.

Carol Fontana and her Arabian horse, Tiki, are taking a trip on the Arizona Trail – 800 miles from Mexico to Utah this spring. They are asking for pledges per mile or direct donations to benefit Prescott Area Shelter Services. For school kids who want to be a part of this fundraiser event, a penny a mile translates to $8; a dollar a mile equals $80.

“My mother was a single mom with three daughters, and while we never lived in a shelter, I know firsthand the challenges. I have been very fortunate and I want to give back,” Fontana says on her website saddleupaz.us.

Those who want to follow Tiki’s progress on the Arizona Trail ride can do so on her website, which also states that 100 percent of SaddleUp! donations directly benefit PASS, which runs the Prescott Area Women’s Shelter, the DAV Family Shelter, and a permanent supportive house for veterans.

The Daily Courier’s Jan. 2 story highlighting the Lee family and the help Les Lee and his three children have received through Agape House generated an outpouring of donations from the community, said Agape House board member and recorder Cindy Campbell.

• Many offers to volunteer.

In addition, KPNX television station from Phoenix will interview the Lee family and Agape House director on Monday, Feb. 1.

A Prescott resident sent a check in to the Chino Valley School District (CVUSD) Jan. 13 requesting it be used in the district’s homeless program. David Crooks, 86, received this response from the district:

Thank you very much for the donation. This morning I took a female, 11th grader, for clothing. She arrived in our district … with very little clothing. I took the student and her mom to Walmart to make a purchase. She was able to purchase a coat, two sweaters, undergarments, three pairs of pants and some tops. She was very grateful. So am I. Thanks again. The purchase made a difference for this young lady.”

Crooks said he gave to CVUSD because of the number of homeless children mentioned in the Daily Courier. He’s never been homeless, but came fairly close a couple times in the 1950s in between jobs.

“I’ve sometimes given a fin or sawbuck to a homeless person begging in Prescott, but I only got to know one a decade ago, and I could not help him sober up,” he said, adding he usually gives 10 percent of his income to charities of all kinds.

The Daily Courier received several emails and phone calls from people wanting to donate to specific families the paper highlighted. We referred them to the list of agencies printed in the Jan. 2 article or passed along their information to the families.

Several people enjoying the sunshine on the courthouse square this past week talked about their experiences with the homeless population. Of the three men we spoke to, all had similar comments.

Cal Davidson, 83, has been walking laps daily around the courthouse for the past 10 years. He thinks about the less fortunate every day. He’s noticed the “dumpster divers” outside restaurants, a veteran pushing a wheelchair clearly experiencing hard times, and a few sleeping off a drunk who sometimes tumble from the park benches.

“That doesn’t bother me. I ask, ‘Are you OK?'” Davidson said, adding that he has bought sandwiches for the hungry and provided money for a man asking about the nearest dry cleaners.

“He was soaking wet. It was obvious he had slept outside,” he said from his folding chair in a patch of sunshine. “If you get the time to talk to these people, you hear some sad stories.”

One man who regularly walks his dog said he’s observed an individual who sometimes appears to be off his medication.

“It doesn’t matter to me. Sometimes he screams at people, but he never hurts anybody,” he said, preferring not to give his name.

His friend, Nick, suggested the city open up some vacant buildings and put up cots.

“It doesn’t cost too much to feed people – you just add more water to the soup. People who walk their dogs here wouldn’t mind giving a quarter or two to the cause,” Nick said, preferring not to give his last name.

Here’s an online comment from Bill Sierra, Prescott: “To state categorically that homeless people universally CHOOSE their lifestyle, as so many people are doing in the comments here, is to not understand the nature of homelessness at all, and to assume every homeless person is the same. … There are a lot of people highly educated, highly knowledgeable, and highly motivated who for whatever reason don’t quite ‘fit in’ to mainstream society. That we systematically punish them above and beyond the difficulties they already face from deprivation and limited resources is quite shameful.

“The overlapping interactions of homelessness, poverty, substance abuse and mental illness are complex problems to solve, and may require more compassion than we are capable of showing at a popular level; beyond the circles of law enforcement, medical staff, and relief organizations who are more trained and used to interacting with the homeless. We can do better.”